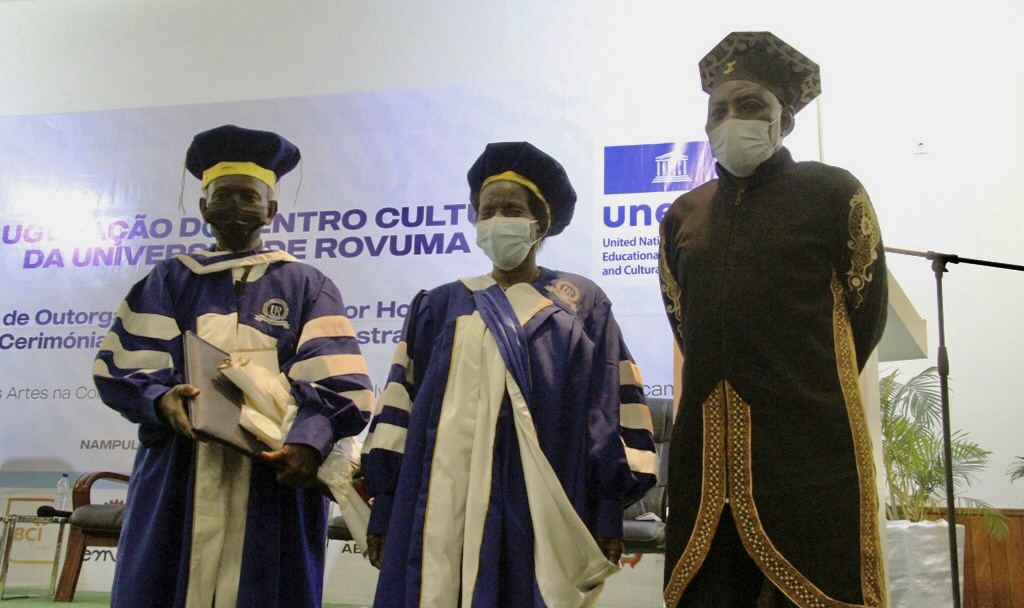 Justino Cardoso and Renata Sadimba received honorary doctorates from Rovuma University in Nampula, in a ceremony attended by the Head of State.Cultural Center of Rovuma University – new facilities that , on the day of its inauguration by the President of the Republic, hosted the awarding ceremony of the title of doctor honoris causa to two figures of the arts. In fact, the ceramic works of Renata Sidimba, the Maconde who conquered the world working clay, as well as the comic books by Macua Justino Cardoso, impressed the President in this exhibition. Inside the auditorium, 25 masters were graduates, but the figures The two artists stood out, which is why Filipe Nyusi delved deeply into them.” Furthermore, we commend these brothers. Thus, we salute and recognize on behalf of the Mozambican people Unirovuma for the wise decision to reward the two artists and through this event we recognize their extraordinary and exceptional achievements that will serve as an inspiration for young people, inside and outside the academy “.Satisfaction. This is how the honorary doctors reacted that each one adds this title for the second time, but this time with a different flavor, because each one left with 240 thousand meticais in money, donated by national institutions. “I am having a lot of surprise in this one. Surprise because there is a constant appreciation of my work”, stated Justino Cardoso, a man from the district of Namapa who, over decades of career, has written nearly 20 comic books, telling the history of the country and all of them were published abroad, because he feels that internally he was not understood. Nyusi took the opportunity to ask for the appreciation of arts makers in the country, having praised the scientific council of that university for the titles awarded this Thursday.

With Mêr in the starting line-up, Bordeaux loses against Stade Brestois (1-2)

US Thank South Africa for Transparency on New Variant

Angola ends borders and is isolated from the region by 2022

With Mêr in the starting line-up, Bordeaux loses against Stade Brestois (1-2)