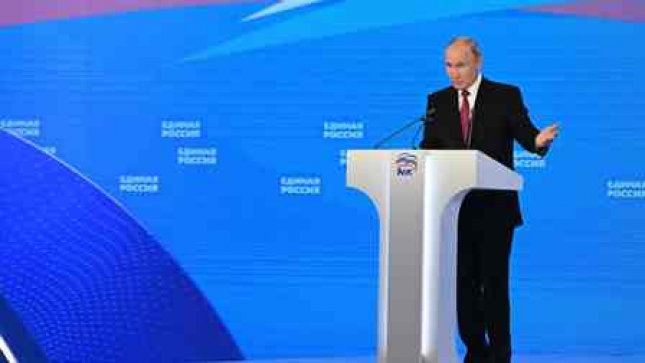 Russian President Vladimir Putin this Saturday multiplied pledges of financial aid to improve citizens’ lives before the parliamentary elections in September, preceded by strong repression against the opposition and the Alexei Navalny’s move. Putin spoke for nearly an hour to several hundred senior officials gathered in Moscow at his party’s United Russia congress. “The leader’s party’s program must be the people’s program,” Vladimir Putin said at a time when Russia Unida has declined in popularity due to the country’s economic stagnation, electoral fatigue and the denunciation of numerous cases of corruption. In a speech interspersed with applause, the Russian President promised to invest tens of billions of rubles in improving public transport, roads and infrastructure, reforming schools and cleaning up rivers.”A prosperous and strong family, with children, is the future of Russia” declared the head of state, remaining faithful to the defense of “family values” and the his aim is to fight against Russia’s demographic decline. Despite the constant drop in voting intentions for the ruling party, Putin was confident of winning the elections to be held between September 17 and 19, to elect as well. m 12 incumbents of federated entities and 39 regional parliaments.”I am convinced that United Russia will set the highest standard to reaffirm its leadership, win the elections,” said Putin, calling for “fair” elections and in accordance with the law. Meanwhile, Alexei Navalny’s opposition will be vetoed in the elections, after his political movement and two foundations he created have been declared “extremist” by Russian justice. Of the many covid-19 cases, driven by the Delta variant and a laborious vaccination campaign, Putin also spoke of the launch of a program of at least 100 billion rubles (1.1 billion euros) to strengthen the system. of convalescence” from the disease.”I repeat: it is better to be vaccinated than to be sick”, said Putin, faced with the skepticism of many Russians in relation to vaccines.Moscow today registered a new record of cases of infection by the new coronavirus and by the second consecutive day, with 9,120 infections in 24 hours, according to official data. (RM-NM)Source:Radio Moçambique Online