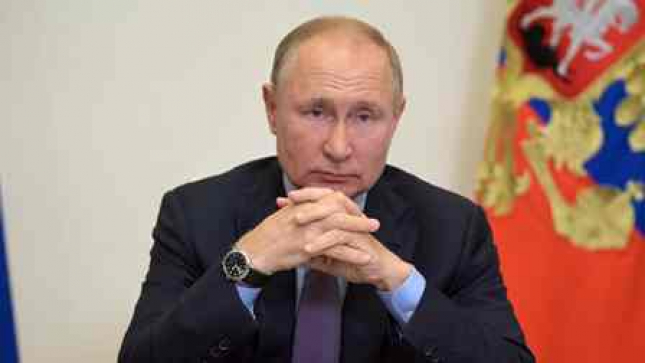 Russian President Vladimir Putin announced this Tuesday social support programs for families, pensioners and military, three days before the start of voting in legislatives that are expected to confirm the victory of the Kremlin party. “It is necessary to maintain this coordination between the parliament and the Government in a perspective of the future. We must work as a team”, said Putin during a meeting of the Government that took place virtually. Putin, who opted for a period of quarantine after being Coronavirus cases were detected in the circle of his collaborators, chaired a meeting attended by members of the Government and four of the five heads of list of United Russia, the presidential party. In an obvious electoral promise, the Deputy Prime Minister, Tatiana Golikova, guaranteed that the 3.5 million pensioners, totaling 43 million, who have not yet received the 10,000 rubles (114 euros) subsidy announced by Putin, will be covered until 16 September, the day before the start of the voting. extends until Sunday. The same responsible recalled that since last August more than 20 million children between the ages of six and 18, or disabled youths up to 23 years of age, have received a single subsidy of 10,000 rubl About two million families with children under the age of three also benefited from monthly social assistance. In turn, Defense Minister Serguei Shoigu, head of the Kremlin party list, informed Putin of an extra individual remuneration of 15,000 rubles (170 euros) for soldiers, and another 10,000 rubles for the retired military. The remaining ministers reported on the current status of education, health, improvement of housing conditions, transport and gas supply, among others. In late August, Putin presided over the United Russia Federal Congress, where he made several electoral promises, including indexing pensions by 2022. According to the latest poll by the Center for the Study of Public Opinion (Vitsom) near the Kremlin, United Russia , which dominates the Duma (parliament), has a voting intention of less than 30 percent, followed by the Communist Party with 16.6 percent. The Kremlin ico and who is serving two and a half years in prison, have accused the authorities of preventing the presentation of several candidates for elections, forcing activists into exile or pursuing independent ‘media’. According to analysts, the victory of the ruling party in the legislative ones and its control of the parliament is fundamental in the perspective of Putin’s re-election in 2024, following the constitutional revision in 2020 and that could allow him to remain in the Kremlin until 2036. (RM-NM)Source:Rádio Moçambique Online