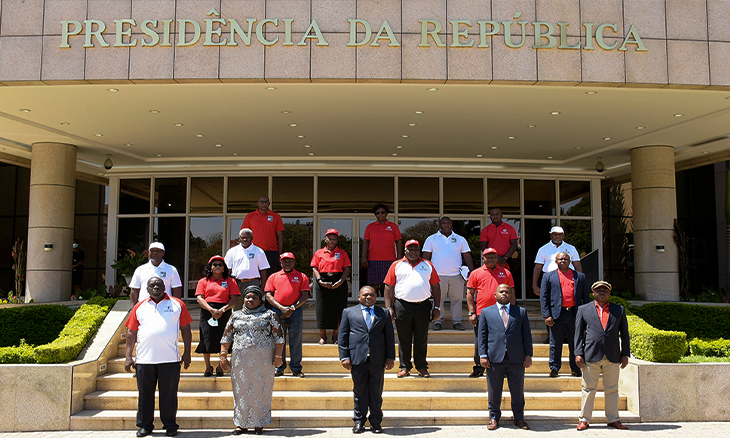 Yesterday was celebrated 45 years since the creation of the Mozambican Workers Organization, Central Sindical (OTM-CS). And to mark the occasion, union leaders went to the Presidency of the Republic to salute the Head of State, Filipe Nyusi. On the occasion, they recognized the efforts of the Government led by Filipe Nyusi in the search for solutions to the problems that afflict the working class, through the predisposition for tripartite dialogue between the Executive, employers and workers represented by the respective unions in the Social Conservation headquarters. Despite this, the workers say that their struggle to improve the living conditions of Mozambican workers continues, they still want a dialogue frank with the social partners, social justice and respect for labor rights. The President of the Republic, Filipe Nyusi, also returned the praise, emphasizing that OTM-CS has also been a good partner of the Government and employers, because it can be achieved. dialogue in a constructive way and consensus is built that in other realities could be difficult to reach. On the other hand, he told the workers that his Government has received the concerns of all at the national level and, as far as possible, has sought to find solutions, but the economic situation has not allowed the solution to be one that meets expectations of the same. He pointed out the cut in support to the State budget, natural disasters, military conflicts and COVID-19 as the major obstacles to the country’s economic development. He said that, in recent years, many workers have lost their jobs in the areas affected by military conflicts, in the center of the country and in the north of Cabo Delgado. What happened due to COVID-19, despite the Government’s efforts to prevent large companies and agricultural fields from closing, it was not always possible to avoid such a situation. Filipe Nyusi says that it has not been easy for him to have tents and/or beaches close, knowing which are a source of employment for some fellow citizens, but the need to safeguard the health of thousands of Mozambicans has had no choice. So he asks Mozambicans to continue to observe prevention so that he can have reasons to reduce the measures taken to hold back the expansion of the pandemic. country and the conditions of workers. He gave an example of the cut in budget support to say that the State subsists only because the Government launched a campaign for Mozambicans to increase production and this allowed for an increase in internal income. This movement says it must continue so that the country can reduce its external dependence even on products that it is possible to produce locally. Source:O País