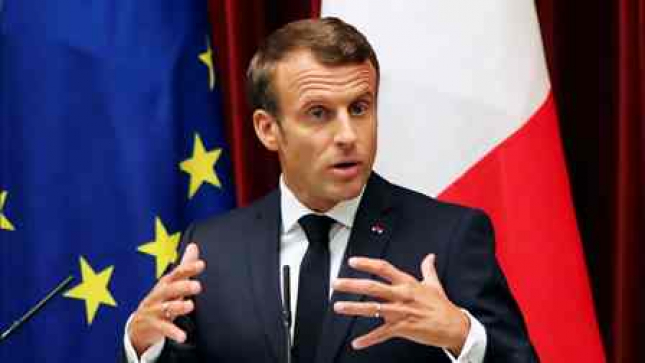 The French President, Emmanuel Macron, who is not yet an official candidate for re-election, announced this Tuesday a series of measures related to security, one of the main themes of the campaign for the elections 2022 presidential elections. Seven months before the presidential elections, Macron indicated that he intends to double the number of police officers on the ground in 10 years, give another 500 million euros to the Ministry of Interior in 2022 and the creation of a parliamentary body to control the security forces. The head of state, who spoke at the national police school in Roubaix (north), addressed police officers and the militarized guard, but also the elected representatives of the region, including one of his rivals, Xavier Bertrand, who leads the polls among the right-wing presidential candidates. Macron also promised “simplification” in conducting the inquiries and said he hoped that in 2023 there could be a “complaint ‘online'”. the creation of a training center on the maintenance of order for police officers, whose action during the demonstrations has been criticized, namely in the face of the “yellow vests” movement, marked by confrontations and violence. Macron’s speech follows on from this of the concertation process launched in February after the police beating of a black music producer, Michel Zecler, in November 2020 in Paris. The case re-launched the recurrent debate in France on violence and racism in the police. After that case, Emmanuel Macron acknowledged the existence of controls due to prejudice and violence by agents. The statements were very poorly received by the police unions, to which an attempt was made to respond through the consultation process. Xavier Bertrand considered as “a candidate’s speech” the presentation of the French President, who, he criticized, “passed aside of security throughout his term”.In the same vein, the deputy of the radical left Hugo Bernalicis said that “in four and a half years (of Macron’s term) nothing has been done and nothing will be done if it is another five years” . (RM-NM)Source:Radio Moçambique Online