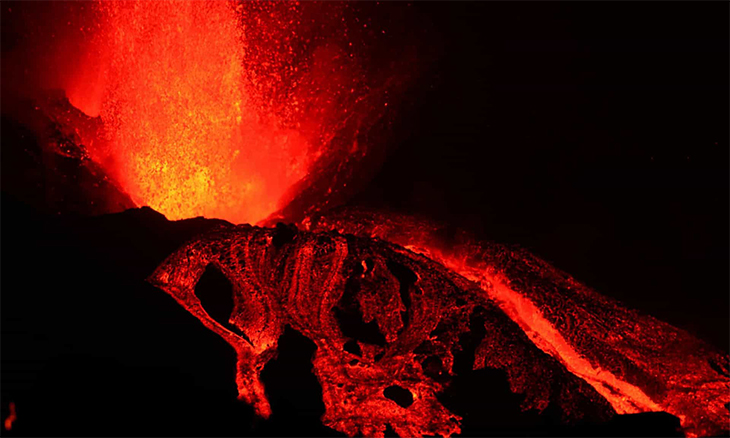 At least 595 hectares of the area of ​​the island of La Palma have already been affected by the lava flow from the Cumbre Vieja volcano, which increased after the northern flank collapsed on Saturday , providing greater fluidity in the flow.According to the report released today by the Department of Homeland Security of the Spanish Government (DSN), the most active lava flow is currently located further north. As one of the lava flows moves towards the sea (300 meters), on Monday the other caused the combustion of hydrocarbons as it passed through a cement factory, which forced the confinement of about 3,500 people in the areas of El Paso and Los Llanos de Aridane, according to Notícias reported to In addition, access to Tazacorte through the evacuated areas has been prohibited until the situation north of Todoque Mountain is assessed. it will be maintained until further evaluation today, due to the advance of lava flow in the industrial zone of Callejón de la Gata, which could affect more warehouses and cause new combustions and gas emissions that could be dangerous. In any case, according to the DSN report, all lava flows advance into the exclusion zone where the evacuation of residents took place. Along with the sulfur dioxide cloud, there is a significant amount of volcanic ash that moves eastward due to strong winds, although the dioxide values ​​are below the risk limit. earthquake measuring 4.1 magnitude on the Richter scale and whose center was at a depth of 13 kilometres. Airports in the Canary Islands are operational, although airlines are canceling flights to La Palma. The Cumbre Vieja volcano erupted on 19 September , forcing the evacuation of more than 6,000 people from the affected areas. The eruption affected banana cultivation and tourism, the main sources of income on the island, where about 85,000 people live.