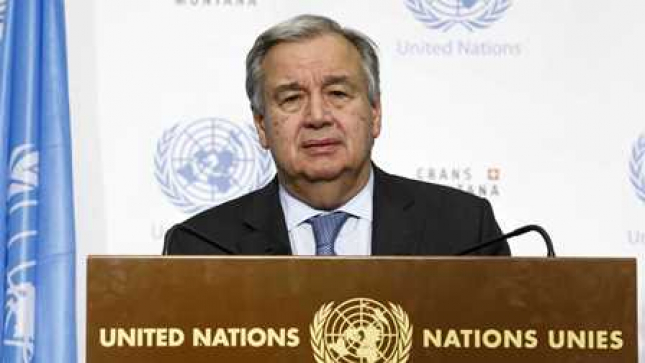 The secretary general of the United Nations, António Guterres, is “deeply concerned” with the situation in Kabul, where a terrorist attack took place this Thursday. dozens of dead and wounded, and convened a meeting of the Security Council. Guterres “condemns the terrorist attack, which killed or injured numerous civilians, and extends his most heartfelt condolences to the families of the dead” said his spokesman , Stéphane Dujarric, during a press conference. The convening of the Security Council, for Monday, aims to discuss the chaotic situation in Afghanistan, after the attacks. Dujarric assured that the head of the UN is “following the situation closely in Kabul, especially at the airport” where the attack took place, suspected to have been carried out by the group calling itself the Islamic State.”The incident highlights the volatility of the situation in Afghanistan, but it also strengthens our determination, as we continue to bring urgent aid across the country to support the Afghan people,” added the spokesman. US Central Command leader Gen. Kenneth McKenzie confirmed this Thursday 12 deaths and 15 wounded in afternoon attacks in Kabul, blaming Islamic State terrorists for the blasts.McKenzie said the terrorists detonated bombs outside the airport, followed by an armed attack. A third explosion occurred. , this Thursday in Kabul, after the double attack that left dozens of people dead and injured outside the airport, where international forces are trying to evacuate thousands of foreign and Afghan citizens from Afghanistan. The third explosion in the Afghan capital was heard by many citizens and local journalists, who soon shared on social media, and it took place just hours after the double bomb attack at Kabul International Airport, although, for now, there are no details about the magnitude of the new explosion. The bomb attack occurred at two different points: one, near a hotel in the Afghan capital, and the other, near one of the gates of Kabul airport, where thousands of Afghans gather trying to flee the country before the the end of the airlift organized by the United States and its NATO partners. There are several reports from various media on the updating of the number of deaths and injuries, with the BBC, for example, quoting an official from the Ministry of Health from the Afghan government to say that the number of wounded is at least 140, and that there are at least 60 dead as a result of the first two attacks of the afternoon. (RM/NMinuto)Source:Rádio Moçambique Online