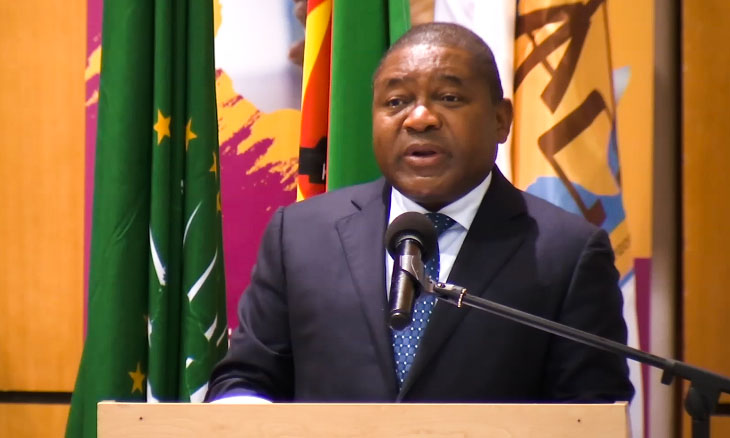 The President of the Republic, Filipe Nyusi, addressed today the opening ceremony of the III International Conference of Constitutional Jurisdictions in Africa (CJCA), which takes place under the motto “Electoral Justice – Transparency, Inclusion and Process Integrity”. On the occasion, the Mozambican Chief Executive urged that the electoral processes in the country should not be a reason for conflicts, but for the enjoyment and consolidation of democracy. Speaking about the electoral process in Mozambique, Filipe Nyusi said that it is guided by two axes. First, by the principle of inclusion and integration and, second, by the principle of transparency, through specific bodies responsible for administering the electoral process, such as the National Election Commission (CNE), assisted by the Technical Secretariat for Electoral Administration ( STAE). In his speech, the Mozambican statesman explained that as a way of safeguarding the transparency, impartiality and responsibility of the managers of the electoral administration bodies, contributing to the fairness of electoral processes, Mozambique has been finding throughout its democratic history , a community of national and international observers. “In the same way, we are pleased to note the role played by the media, for the coverage that is given by their professionals, with emphasis on the journalists who follow the entire electoral process, from submission to submission of candidacies, electoral campaigns, voting, appeals filed until the day of the proclamation of the results”, he added. With regard to electoral justice, “one of the guarantees of the electoral process is the independence of the institutions of electoral administration and the role played by the judiciary”, said Nyusi, raising awareness of the need for impartiality in management of electoral processes. “The electoral processes in the Mozambican context should not constitute the basis of conflicts, but an opportunity for the people to democratically elect their leaders”, he argued. The CJCA emerged at the 15th Ordinary Session of the Conference of Heads of State and of African Union Governments, held in Kampala, Uganda, from 25 to 27 July 2010, where member countries decided to create a body to ensure the promotion and dissemination of the universal values ​​and principles of the rule of law, democracy and human rights, enshrined in the constitutive act of the African Union.Source:O País