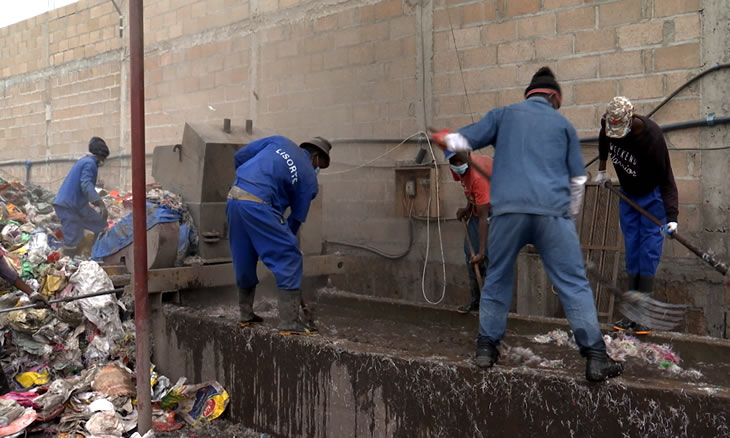 Some residents of the Zimpeto neighborhood, in Maputo city, complain of environmental pollution and attacks on public health, allegedly caused by a Chinese-owned company, which is dedicated to recycling of plastic bags. Inside the factory, you can see piles of plastic bags, brought from various dumps in the city of Maputo. There are, in the place, men who work the plastic, putting it in the shredding machine, which then goes on to the washing section and, finally, it goes on to burning, where an intense smoke is produced that spreads through the environment. But outside, where the communities are, there is concentrated water that comes from the factory and gives off nauseating smells. Mosquito litters are seen, a scenario that causes concern to these residents. Nádia Nhabinde says that “we are feeling sick because of the water that comes out of this Chinese wall, because of the work they do and we have been there to complain, but they do nothing”. João Marco, one of the residents of Zimpeto , says that the Chinese factory deceived them and, today, it is jeopardizing the health of the residents. “When the factory came here to operate, it said it was to produce cookies, so the neighborhood structure agreed, but over time, we started to smell burning wire, plastics and we asked, why wasn’t it the smell of cookies . We went to the factory, talked to the Chinese and verified that they are recycling garbage. “At night, the scenario becomes more critical. The Chinese-owned company, based in Zimpeto, for approximately eight months, denies that it is polluting the environment. Delfina Tete is the factory assistant who spoke to our report. “The population has been complaining about the water that comes out of the company, but we, as a company, have already closed that water; as you can see, we are fighting to create mechanisms to remove that water and, as for the smoke, we have a chimney, although it is not very high”. True or not, the fact is that there is stagnant, strong-smelling water and smoke as well. Part of the land around the factory that was devoted to agriculture, allegedly, is continually losing production capacity due to the actions of this factory. Parents