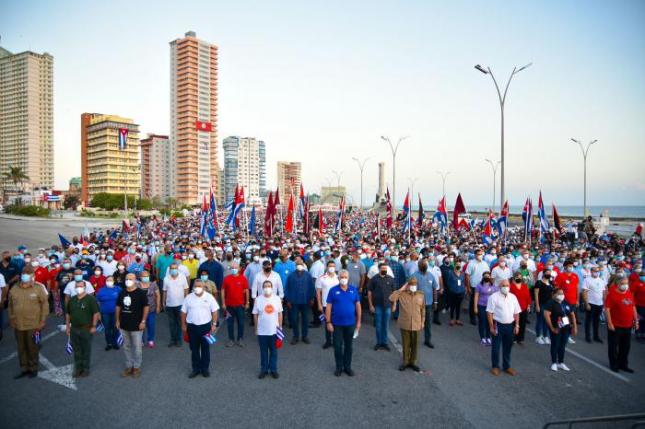 This Saturday, Cubans marched against foreign interference and media manipulation. The President of the Republic and First Secretary of the Central Committee of the Communist Party of Cuba, Miguel Díaz -Canel, in a televised speech to the entire nation, denounced once again that the country is under sophisticated fire from a cyberwar, as part of which is intended to tell the story in reverse. Díaz-Canel said the unrest of recent days on the Caribbean island “is a lie” during a rally of “revolutionary reaffirmation” with tens of thousands of supporters in the capital Havana “What the world is seeing from Cuba is a lie”, underlined Díaz-Canel, who, along with former President Raúl Castro, denounced the dissemination of “false images” on social networks, where “encourages and glorifies indignation and destruction of property “.Miguel Díaz-Canel insisted on the existence of “overflowing hatred on social networks”, having been cut off access to the mobile Internet between 12:00 on Sunday and Wednesday morning, before being restored, although in an unstable way. In Cuba, “this is not a government that represses its people”, insisted the leader, six days after historic demonstrations against the communist executive, which resulted in one death, dozens of injuries and more of a hundred arrests.”No lie was committed by chance or by mistake, it’s all the c cold calculation of an unconventional war manual”, said the President, who accused the United States of having provoked the protests, starting last Sunday. The crowd present at the demonstration, called during the night, mainly through work centers and universities, to a coastal avenue in Havana, was shouting slogans such as “Born to win and not to be defeated!” Former President Raúl Castro, who attended the demonstration, was forced to temporarily abandon the reform , aged 90, due to the gravity of the situation. Shortly before the start of the demonstration, a man shouted “Patria e vida!”, the title of a protest song that became the anthem of anti-government protesters, having been stopped by the According to the official newspaper of the Cuban communist party Granma, similar demonstrations were called in other cities in the Caribbean country, such as Santiago de C. uba, Bayamo, Camagüey and Santa Clara. (RM /Granma/NMInuto)Source:Rádio Moçambique Online